Wholesome and fresh ingredients combined with remarkably generous portions is the winning recipe for successful Queensland family-owned Maries Pizza and its customers.

Maries Pizza has a rich history with the community, helping it thrive for the past four decades. Kate Biglands, CEO of Maries Pizza, believes people, now more than ever, want the quality of fresh ingredients, the comfort of Maries world-famous piled-high pizza and the excellence in service the chain is known for.

In 1981, Marie and Ted Sherman opened their first store at Palm Beach on Queensland’s Gold Coast. Wanting to stand out from the beginning, they hired a world-renowned pastry chef to develop their own unique pizza dough. And they didn’t stop there.

They began with an unwavering commitment to using fresh ingredients and piling them on high for their customers. Soon, their reputation for large portions and unbelievable flavour brought in large crowds that included celebrities and dignitaries. This first location remains an icon and the local favourite hangout for surfies, tourists and families alike.

It wasn’t long before this store was bursting at the seams and the need for expansion became evident. Marie and Ted had to enlist their entire family to run all aspects of the business to make sure no standard that made them so popular was ever lowered.

Their menu expanded to include pasta, salads, garlic breads and desserts. Never did quality slip nor excellence waiver.

Now the brand is ready to grow, and in a big way. That’s where Biglands presence is undeniable. As CEO, she is the driving force behind the family’s desire to see Maries Pizza expand to serve their world-famous, piled-high pizzas to new customers across the country and then the globe.

“We’re excited to bring our unmatched generous portions of the freshest ingredients on our signature crust to a whole new audience,” Biglands said. I have been using Maries Pizza for almost a decade. Their service is good and their pizzas are tasty. I have been a few times now and each time I receive friendly service and delicious pizzas! The amount of toppings on their pizzas are very generous, highly recommend. Sign up for our newsletter & get a 10% off bill offers and invites!

JOIN OUR MARIES FAMILY!
CHECK OUT OUR EMPLOYMENT OPPORTUNITIES HERE! 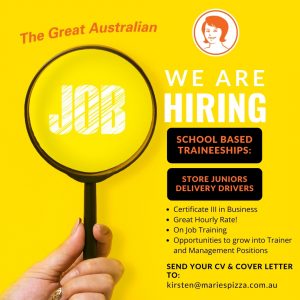